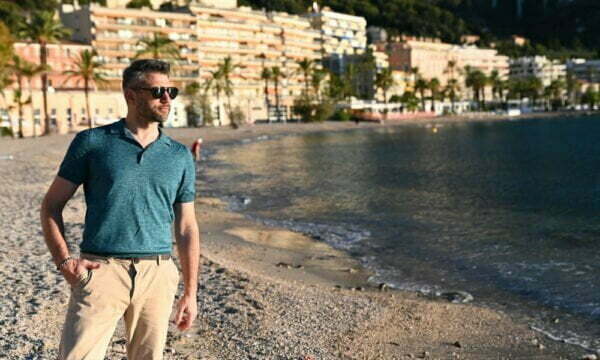 Do you want to know the best way to stop stressing in difficult situations?

I tried it myself, and it worked!

Once I received an invitation from a super successful investor to meet him in his castle situated in Oxford. I ordered a flight ticket; got into my car. On my way to the airport, I got stuck in an accident—I had a flat tire. Seemingly, it was nothing to be overly worried about, but a) the flight was in two hours; b) it was raining harder than in The Matrix Revolutions, Four Weddings, and a Funeral, Shutter Island, or The Truman Show. Do you remember that scene when the heaviest rain tried to overtake Truman? It’s fun to see from the side, but when it happens to you…

Dammit. Rain was so heavy that the lifting jack slid on the slippery asphalt and disappeared under the car. I tried to stop the passing cars, but the dense rain formed blinding curtains of water, and the drivers couldn’t see me. Instead of stopping to help, one of them covered me with mud. I was wetter than water itself! So I quickly got back into the car. I thought to myself, “I don’t want that fucking mansion where a millionaire invited me.”

Suddenly I remembered a man from the motor vehicle service (calling there, I noticed that I have a spare tire). He muttered in an apathetic voice, “Assistance will get to your place in about a few hours.” I couldn’t wait; it was less than two hours until my flight. I had to make a decision! To leave the car on a straight road would be selfish; I knew that someone would definitely crash into it. I jumped out. I had to slither under the skies of trickling Niagara Falls for the second time. Fortunately, I managed to pull out the jack, then slipped a spare tire under the car. But while trying to change it, I predicted my misfortune: The spare tire was taken from another vehicle!!!

I hopped inside the car. I was soaked, so I decided to change my clothes (I didn’t want to wet the seat). Since I was planning to go on a journey with my bag, I had a spare pair of pants and a shirt. Taking off my shirt, I remembered my ex, who once called and said, “I was driving to work but got stuck in the snow. The wheels are turning, and there’s nothing I can do.”

Leaving all my work, I jumped into the car. I only got there after 15 minutes. She was still waiting for me. So I thought, “If no one helped such a beauty, it’s naive to expect that someone will stop to help me in such a downpour!”

As you can see, the situation was hopeless. But not for me…

I already knew the biggest secret of the universe, “There are no bad days, but there are days when you voluntarily convince yourself that today is a bad day.” So I asked myself, “What would a happy bastard I met in Monaco do?”

The answer was, “Yeeee, a happy bastard would take everything from this moment!”

Thinking about it, I remembered one thing. I bent and opened the glove compartment. I slipped my hand in. I grope with my fingertips a box of chocolates I received from my client (my project manager called this man Goldstar). I looked inside it, and there it was; the last piece of chocolate. It had that white coating, most likely caused by the sun. The sun had embraced the chocolate with its pleasurable waves. Now it was my turn to embrace the chocolate…

The sweet taste overwhelmed all my receptors…

The chocolate slowly and softly dissolved inside of me.

This moment allowed me to distract myself elsewhere. Peace saved my ass—and I managed to catch my flight! I WAS NOT LATE AND TOOK PLEASURE WITH CHOCOLATE!

“But how did you succeed in solving that problem with the flat tire?” someone will ask. Anyway, is this the most important part of the story? Well, okay, if you really care about it, one day I will tell you the story (if you come up to me on the street and ask), but for now, let me talk about the ability to enjoy chocolate in the middle of a sea of problems, that surround you sometimes, dear reader, and…

“Whaaaaaat? You are suggesting eating chocolates in difficult situations?” retorts one of the readers. No, not at all! Chocolate is a metaphor. I’m talking about the ability to deal with emotions when you can’t control things that are happening with you.

I have in mind times when:

I know it’s hard to achieve all of this because many people don’t like that almost everything in this world isn’t going the way they want it. After all, it’s unpleasant when you can’t control the weather or rain. But you don’t have to want it. Better let things happen as they should. And all you have to do is control your inner world. Do you know how? Answer, how will you behave when you receive criticism? What do you do when your computer stops working?

“Okay, I understand what you want to say. Now answer, how to control emotions?” you will ask.

I have an answer. And it will be deadly simple and banal.

To understand the answer, I had to find it myself. I tried many things. Finally, I created my first method. It didn’t work. I changed my style and experimented again, and again, and again x100 times. It wasn’t easy, but after absorbing the works of Jacque Fresco, Dario Salas Sommer, Carl Rogers, and many other respectable people, I finally understand the essence. To manage emotions, you need to start learning how to manage emotions.

I know many expected a different answer that would be easier to put into practice. Many would agree to swallow a pill like it was in The Matrix to help themselves forget about their problems, but the truth is, you can’t control your emotions if you don’t learn it. Amen X