The new movie “Eternals” is airing in theatres. Promoters did an excellent job, so I dreamed of seeing it all f*cking week but didn’t have time. And it’s good because I have responsibilities. When you are responsible for something, you don’t waste time on pleasure. Of course, I love Marvel movies and sitting in the theatre, but there are more vital things to do. It’s hard to disconnect myself from the pleasure Marvel and other companies bring, but PLEASURE is not FULFILLMENT. Pleasure is escaping from reality. Plus, sometimes I ask myself: “What is better, to see what others created, or to be a creator?” or “What is important, to be sage of Marvel movies, or create your own empire.”

For me, it’s better to be a creator. Because when you create, you inspire others. Ant is the right thing to do. When you inspire others, your life becomes meaningful. So, the more I create, the more I will be proud of my life results. But to become a successful creator, you need to take responsibility.

I believe with all my heart that our (your and mine) life results and success depend on the responsibility we take. The more you are responsible, the more successful you are in life, business, and so on. Responsibility motivates you. It helps to focus and… Oh yes, responsibility motivates you to do challenging things that later will bring enormous fulfillment! Don’t believe it? Look around. All happy and successful people are responsible. Grant Cardone is responsible to investors, and Dalai Lama is super responsible too. Dalai Lama has a list of things to do. He doesn’t have time for chigi-chugu. (By the way, I don’t even know what is chigi-chugu.)

And if you are irresponsible, you will smoke weed all day long. Of course, you, dear reader, don’t smoke weed, but how much responsibility are you willing to take?

Do you want to know more about it?

How to take responsibility?

The first step is to understand how it’s important. Second, always remind yourself about the importance of responsibility. Because if you forget about it, you will be lost again like a boat in a dark ocean…

One of the reminders can be glued to the most seeable place in your flat. You can glue to the wall one of the three responsibility poems I will share now:

Poem about the important job

There was a most important job that needed to be done,
And no reason not to do it, there was absolutely none.
But in vital matters such as this, the thing you have to ask
Is who exactly will it be who’ll carry out the task?

Anybody could have told you that Everybody knew
That this was something Somebody would surely have to do.
Nobody was unwilling; Anybody had the ability.
But Nobody believed that it was their responsibility.

But Nobody told Anybody that we are aware of,
That he would be in charge of seeing it was taken care of.
And Nobody took it upon himself to follow through,
And do what Everybody thought that Somebody would do.

When what Everybody needed so did not get done at all,
Everybody was complaining that Somebody dropped the ball.
Anybody then could see it was an awful crying shame,
And Everybody looked around for Somebody to blame.

Here’s one more poem about responsibility:

Something I’m learning, something that I know is true.
The only person responsible for your actions is you.
What goes around, comes around, as you may have heard.
You give and take, you receive what you deserve.
As much as I may not want to admit,
this mess that I’m in, I got myself into it.
What I’ve done, I’ve done a couple of times.
They say you live and learn, well why didn’t I?
So I’m dealing with the pain, and taking on the ache
I have to lie in the bed I didn’t mean to make,
So instead of looking up 2 heaven and asking god 4 help
I’ll take a look in the mirror, a good look at myself.
I have to realize and accept what I’ve done wrong,
Learning lessons is tough but not if your strong. 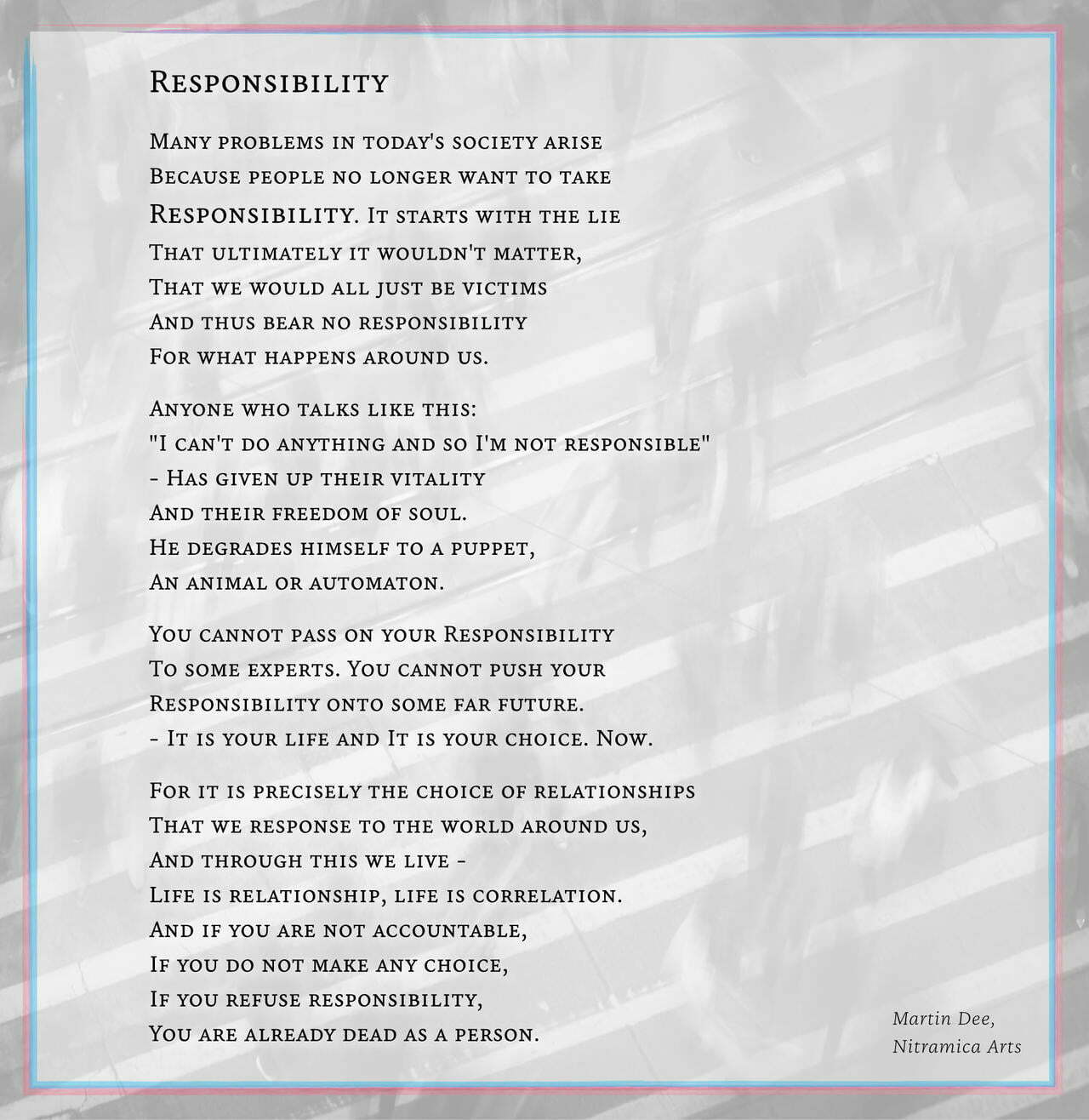