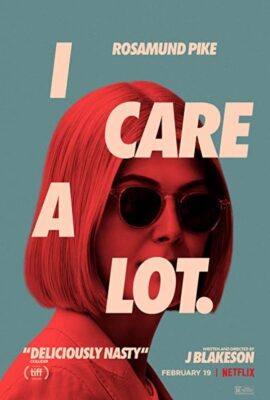 It’s a movie about a motivated woman who claims to work because she wants to help others, which was a scam, as is often the case in our lives. The film’s protagonist resembles an anti-superhero that can be found in real life. People like this annoy me, so I can still feel my blood boiling even though the movie is over. While it’s still boiling, I decided to share my emotions with you!

Though ruthless critics kicked this movie with their dirty shoes, even though it didn’t appear on the pedestal, alongside such films as “The Avengers,” I was still impressed with the unpredictability of the script and the speeches that a protagonist—woman emphasizes at the end.

Sitting in a TV studio, talking about her road to success, she shares a few phrases that were popularized by society.

“Just Know Who You Are, And Use That To Your Advantage.”

When people offer you to discover who you are, they forget to emphasize values. That’s why the world is full of bad people like in this movie. After all, those who exalt individuality leave decency in the shadows…

“Alex, you talk like a bummer,” a reader will say who has not read my articles and therefore doesn’t know that I’m a post-postmodern beginner of omnism philosophy, so standard labels don’t suit me.

“There are no secrets; all it takes is hard work, a determination never give up.”

Oh heck, how tricky is this phrase. After all, many rich ones encourage people to work, work and work. They say there is no secret, but often in this “truth,” underground currents can be found.

For example, the heroes of this movie had to kill to be successful.

And the heroes of the movie had to wrap many seniors around their fingers deceptively.

And she dares to offer others also to work hard.

Or maybe the filmmakers wanted to inspire women to mistreat older people? No… I think their task was different—to show that highly successful entrepreneurs don’t always earn honestly, even though they speak smartly.

When you ask people like them how they’ve become successful while scratching their heads, they will say, “I worked hard, and that’s it.” Interestingly, that is what I used to say in the past. So this movie changed something in me. I will speak clearly about how I achieved my goal from now on. Sure, in my articles, I wrote clearly about how I started my business and how I increased my sales, advertised it, and got customers from all over the world. Still, this movie helped me understand how important it is to explain my journey in detail. Because I achieved everything with honest work, not like the main character of this movie.