Do you know what a memento mori chart/calendar is? Today we will discuss the main pros and cons of it! 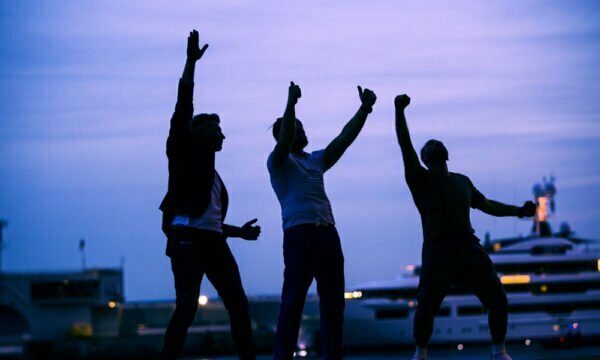 What is a memento mori chart or calendar?

Memento mori is a Latin phrase that in simpler English words means “remember you’ll die” or “remember you must die.” 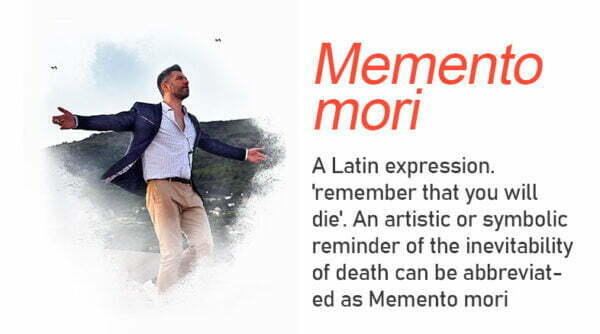 Our predecessors used this phrase when they spoke of results, meaning, and the end of life.

Famous philosophers believed that you could understand its value when thinking about death. Such faith gathered a platoon of enthusiasts who created a tool to help fill life with significant meanings.

The memento mori chart is used by thousands of people worldwide, so you’ll find tons of material online about it. For example, you can use hundreds of apps where you can schedule days and even listen to songs about it. So it looks like Alex Monaco won’t say anything new, but I’m super resourceful. That’s why you will receive a gift and pure truth. Additionally, you will learn about the pros and cons of the tool. Let’s start with the pros!

1. Squeeze out of life more happiness, fulfillment.
2. Concentrate on the essence, on what really matters.
3. Lead a more meaningful life. Because as you look at it, you become more and more aware of what you are doing wrong.
4. Remind yourself that you are not eternal, which can lead to a mindset change.
5. Take life more seriously.

I could list many other pros, but I suggest you give it a try. Practice is always better than just theory, right?

So take a pen and a piece of paper.

How to paint a memento mori calendar from scratch 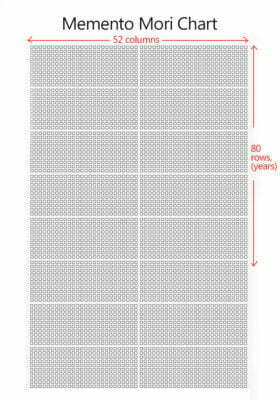 Yes, prepare 80 rows in vertical and each width of 52 columns.

Every cell represents one week of your life.

Mark each square you lived through. So, the first day is your birth. 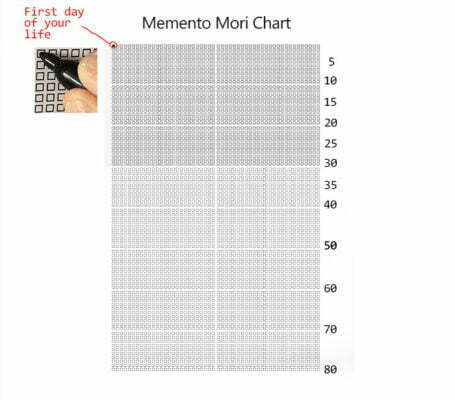 Now fulfill all the years you’ve lived, and trust me that you will feel the life flowing through your fingers like sand…  Pssssss 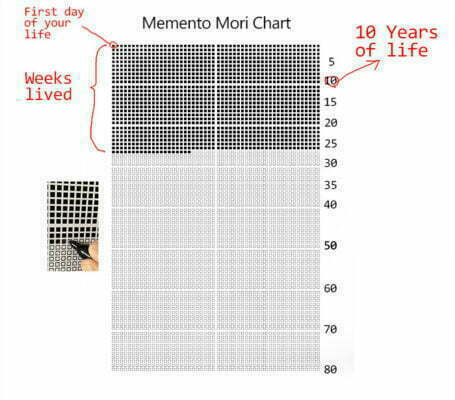 Or maybe this activity isn’t important? Perhaps it’s not worth spending time on this activity? Then start a game on your mobile phone or…, but I would look at life with sober eyes in your place! Oh yes, I’m sure if Seneca were still alive, looking you in the eyes, he would say:

“It’s not that we have a short time to live, but that we waste much of it. Life is long enough, and it has been given in sufficiently generous measure to allow the accomplishment of the very greatest things if the whole of it is well invested.”

Seneca was a surprisingly intelligent man. Understanding overtime what every inhabitant of the earth should understand, he made sure that he would leave more than a pile of bones to the world after his death! Thoughts about death gave him motivation!

Oh yes, not only Seneca was able to squeeze the benefits out of thinking about death. For example, a philosopher Democritus had an interesting ritual of visiting a cemetery. It’s said that it’s easier to think there. I have tried, and it always works. Because you see other people who will never be able to enjoy life again, and you still can… So, looking at the names written on the monuments, I thought of the words of the stoic Marcus Aurelius, who often spoke, “Consider how ephemeral and mean all mortal things are.”

Do you see how many people thought about death? Both musicians, painters, and Frida thought about it. In her work, she constantly emphasized the importance of death. 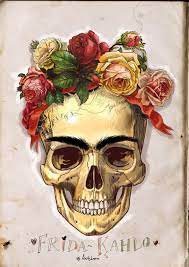 “Alex, idiot, after all, thinking about death causes stress! Who needs it? Why should one use your suggested death calendar?” an angry critic will shout out. I have an answer for him! Did you know there was research done? It became clear that thinking about death can get you in a lot of trouble. It has long been believed, but a more recent study has raised doubts. I provide an excerpt from the information desk describing the research. I’m quoting: “Human behavior is selected to urge people to avoid situations likely to lead to death. This suggests that mortality salience effects reflect adaptive responses to solve specific life threats rather than an unconscious attempt to avoid this realization.”

Did you understand anything of the quote provided? That’s not all. I’m quoting the data provided by Christian Smith: “Scientists later turned their attention to the positive aspects of death awareness. They found that “management of death concerns can play a key role in motivating people to stay true to their virtues, to build loving relationships, and to grow in fulfilling ways. (When death is good for life: Considering the positive trajectories of terror management).”

And how about you, what do you think about it, reader?

Are you afraid to think about it?

But many people have tried to think about death but haven’t died? I’m among them. Therefore, I propose to continue our conversation!

Reddit is a fantastic site where you can find candid conversations and discussions. That’s why I always go to see what people write on topics that I care about. So I entered the desired keyword and found the information for which a medal should be awarded.

Oh yes, one of the Reddit users shared his father’s chart. 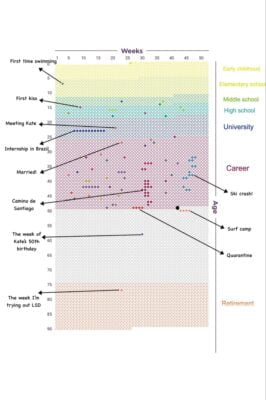 As you can see, this calendar looks like a map of human values. It shows how many unforgettable adventures and experiences a person has experienced in his life. This shows how much a person’s life is worth. When you see such a graph, the question arises involuntarily, “What good have I done in this life? Maybe it’s time to take life by its horns?”

Oh yes, you can’t even imagine how much I respect the person who filled the chart…

I respect him for wanting to get more out of life.

Speaking of respect, I will also mention Christian Smith, who cares about his dreams. Oh yeah, this man hung a calendar on his wall! 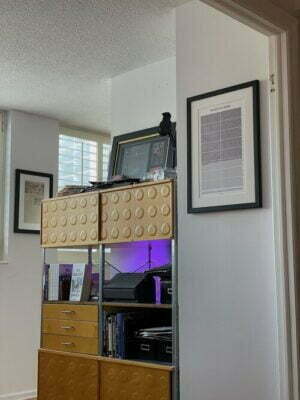 You can do the same—hang in your room memento mori poster!

Wait, why am I only talking about the pros of this tool? What if we talk about the cons?

To whom I don’t recommend using the memento mori chart

The memento mori chart should not be used by those who are afraid to face important life questions.

Yes, it’s true; thinking about life can lead to sad thoughts. However, in my opinion, it’s better to be sad for some time than to live an uninteresting life. Better to think about death for a moment than to live a meaningless life. Oh yes, there were times when I was very sad to see this chart… but now I know what I should do!

I will conclude with the words of John Furniss: “Never forget that you must die; that death will come sooner than you expect… God has written the letters of death upon your hands. In the inside of your hands, you will see the letters M.M. It means ‘Memento Mori’—remember you must die.”

True, I almost forgot to give you a gift—the calendar!

🎁 Download a free memento mori calendar and my book, which will remind you how important it is to appreciate all you have today! 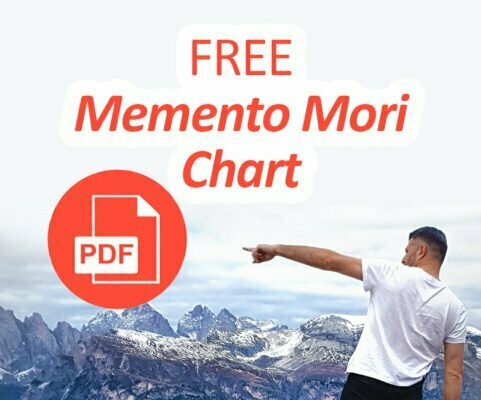 And don’t be lazy to download the free version 🎁 of my book “Happy bastards” about memento mori moments. This book is the best kick-ass guide you will ever need. Download the 100% free excerpt here: www.alexmonaco.net/book-happy-bastards