In a moment, I will introduce you to the moon illusion. You will also learn how you can benefit from problems!

Have you ever seen the moon illusion, when it nearly touches the Earth and appears about 50% bigger than it really is?

You remember that big moon, don’t you? 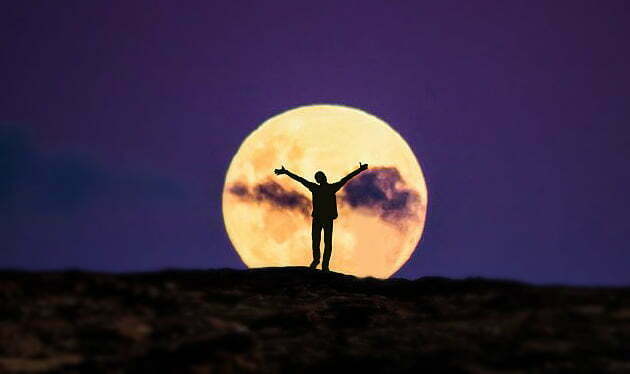 Why do you think the moon looks so big?

Many scientists, philosophers, and psychologists (specializing in human perception) have tried to answer this question.

Some have suggested that the moon looks bigger because, as it descends, it wants to be equated to small objects adorning Earth, and this creates the illusion that the moon is bigger than it actually is. On the other hand, others have suggested that… Well, in a nutshell, there are many hypotheses. However, there is not a single explanation that all researchers can agree on; that is what the many times awarded psychology lecturer Helen Ross and psychology professor Cornel Plug state in the book “The Mystery of the Moon Illusion.”

So while scientists are looking for one answer, I suggest to pinpoint the finger on the similarities that exist between the moon illusion and problems that we encounter each day. I mean, in most cases, life problems seem so much greater than they really are.

Similarities between the moon illusion and life problems

Do you remember how you felt an enormous, downward weight in your heart after you received one gram of criticism; however, ten minutes later, you realized that this problem just seemed bigger than it is? Some have encountered it once, others 20 times a day. It confuses life, gives a lot of stress, anxiety.

An interesting fact is that when your friend has a problem, when he starts to worry, you try to convince him that the problem isn’t so big at all and that it will run away in the morning (it always happens, because moon always runs away in the morning scared by the sun, and blah blah blah). However, when you have problems yourself, you give in to emotions and feelings that the problem is too big. Isn’t it ironic?

Yes, that’s true, when you encounter a problem, it always looks bigger than you like in this photo: 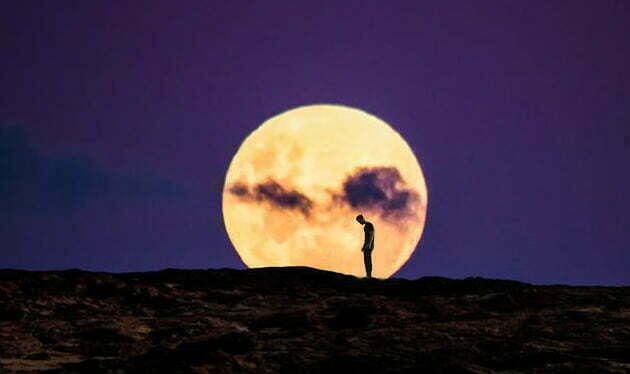 “I understand what you are trying to say, Alex, but tell me what I can do to put problems into perspective, allowing me to see them as they really are?” you may ask. In response, I will shrug my shoulders. After doing this a few times, I will say: “PROBLEMS WILL ALWAYS LOOK BIGGER THAN THEY REALLY ARE, AND THIS IS SOMETHING THAT YOU WILL NEVER, EVER CHANGE!”

It takes ninety seconds to identify your emotions

“90 seconds? What nonsense! I know what to do after just three seconds!” will state one of the readers, forgetting about the event in which he managed to avoid a massive car accident and then, unable to regain himself, sat in his car for a few minutes. As you can see, the belief we can control our emotions in 0,5 or 1 second is wrong. Rather emotions control us until we solve them, which takes maaaaaaany seconds. If you don’t believe in scientists, I have a better offer for you. Let’s dive into two memories related to your life, okay?

Memory no. 1: Barking dog.
Do you remember how you jumped, without being able to control yourself, after hearing a barking dog? It was the work of your subconscious! Yes, it’s the subconscious that decides how to behave in the first seconds when you don’t yet understand what’s going on!

Memory no. 2: A friend who sent you to hell.
Can you remember how you felt when a person close to you told you to f*ck off? You didn’t even know how to behave. It took time for you to consider how to do the right thing because your emotions dominated you.

So, here’s a fact: It’s impossible to change how we react to an event during the first seconds; however, we can control our emotions later.

Of course, this requires vigilance. Therefore, when it comes to powerful emotions, you should—

You know what? I have an idea! Instead, what if I call the phenomenon that occurs when you are experiencing a huge problem “the problem illusion” from now on?

The illusion of the problem (problem illusion)

As you can see, today, we created a new term that hasn’t been used by anyone before—“the problem illusion” (if you don’t believe me that this term hasn’t been coined before, Google it).

I’m certain that understanding what the problem illusion is will help you in all your life situations: communicating with an angry boss, with a disgruntled neighbor, with your other half, or even when surfing the web: Facebook district, Instagram district, and other internet districts.

Don’t you believe me? Let’s check! Picture the situation.

You switch on Facebook after waking up in the morning.

You notice a nasty commentary about your appearance, your creative work, that has the potential to f***k your whole day or week, or maybe even your whole life.

When you confront a similar offensive comment, say a few words to yourself: RELAX, IT’S A PROBLEM ILLUSION.

And yes, don’t try to figure out what you did wrong—it’s not important!

The essence is to understand emotions.

In your mind, picture the size of the problem and you sitting on the roof. 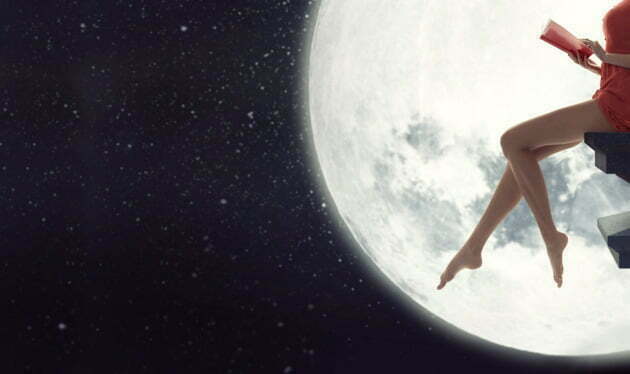 Breathe in. Straighten your shoulders.

And now ask yourself: “How can I benefit from this problem?”

Don’t ask yourself how to revenge, humiliate a companion, opponent, enemy.

Or yes, no matter what you’ve been told or how much you got criticized or ridiculed, you need to look at yourself from the side more often and remember the problem illusion.

Because this is a rule that cannot be changed even by God: Day always replaces night. I mean: The moon illusion, like the problem illusion, doesn’t last 24 hours.

We can talk a lot about it, but when you face a problem, you may feel a lack of experience. For this reason, I want to give you a few exercises. Be sure to use them, dear reader.

To do this, let us get onto a life stage together right now, where I will give you a few scenarios.

You can call it a game, training, or a rehearsal.

Imagine that you are on a televised debate show. During the live broadcast, you receive a question: “Are you stupid or not?”

What would your answer be?

What if you raised yourself like a peacock raising its tail and responded: “You are the idiot!” Show them you can bite back!”

Therefore, one must act wisely. Take an opportunity—start up a discussion that touches on important topics!

This way, you will prove that:

a) You are not a bigheaded brat.

b) You can control yourself.

c) You can listen to the opponent and their criticism.

d) You are worthy of respect because you act intellectually and understand that conflict is an excellent opportunity to show your HUMANITY.

“But I don’t want to talk to bullies about important topics. Bullies don’t care about global things!” you will say. Yes, if a dispute happened at the Vilijampole market instead of on a TV program, then it would be quite strange to talk about subjects of greater caliber, suppose with someone who had more than one drink. In this case, I would suggest talking with a smile—sarcastically. However, if more than two sober people are involved in a conversation, you can really touch on global topics.

“I understand what you’re saying, Alex, but what can I respond exactly to an acquaintance who blurts out that I’m an idiot?” will ask another reader. I have several answers. Choose your favorite!

You asked me whether I am an idiot, didn’t you? Thank you for the question. By the way, many people happen to be watching us right now, and some viewers had critical things to say and similar questions. The majority would take your comment as criticism. Studies have shown that two out of five people would worry over these words and feel that your question should not be responded to at all. I think you would like to help these people. Could you share with the viewers how you would answer this question?

An acquaintance of mine once said that Donald Trump is stupid. Well, he became president of the United States, and like it or not, he is successful. I wouldn’t mind being as dumb as he is.

An acquaintance of mine once told me about who he called a “dumb” man that gave away everything to others. He used to help shelters for homeless people while he lived in a tiny apartment. We interpret the meaning of “dumb” or “stupid” differently. Sometimes, a dumb person performs more work than a wise or selfish one does. And sometimes, the words “dumb” or “stupid” can destroy and take away hope. Psychologists say that one of their tasks is to give hope.

“What if a coworker says that I’m blowing my words in the wind; that I’m babbling? What should I say to him?” one of the Patreons will intervene. I have an answer!

“You say I’m speaking in vain, blowing my words in the wind. You know that wind power is used in wind farms to generate electricity. I think if people used wind properly, there would be no need for nuclear power plants. After all, the wind would enable us to protect our environment. Therefore, the word ‘wind’ is a very bad metaphor. And as for the air, do you know how much air costs on Mars? We would die without that air in a few minutes. Don’t underestimate air! Furthermore, talking about empty phrases, very often, the phrases people say are not empty. For example, small children, wanting their parents to respect and help them, say the words ‘I believe in you!’ These words seem very simple. They don’t seem to say anything, but even if they don’t mean anything to someone, they are still capable of changing their entire life. What matters is how to say it and to whom.”

As you can see, the answers above are informative and help lead the topic toward an important discussion.

While communicating in this fashion, you show your position on nuclear power plants, which is quite important. Moreover, you are emphasizing the importance of saying nice words to people.

“I’m not so creative to come up with a similar answer,” the reader will say. Yes, it’s hard to do this, but only if you are constantly trying to bite your companion. You see, when you care about revenge, you focus on searching for bad words, and that diverts you away from the essence. However, if you care about global problems, you won’t even have to try and think about what to talk about—the right thoughts will come. This is where the truth is hidden: your actions, the words you use, depend directly on the level of the manifestation!

Therefore, you don’t need to learn answers to respond to the humiliation and criticism that I have given today. Nonetheless, it’s important to change your mindset to become a person who treats provocateurs wisely. Only then can you squeeze the benefits out of your life problems!

However, in this case, recognition will be a bonus you get as soon as you change your mindset!

Use all problems to your advantage!