In this article, you will find out how to be normal. My advice will shock you because it contradicts every other article on the internet! So, let’s begin! 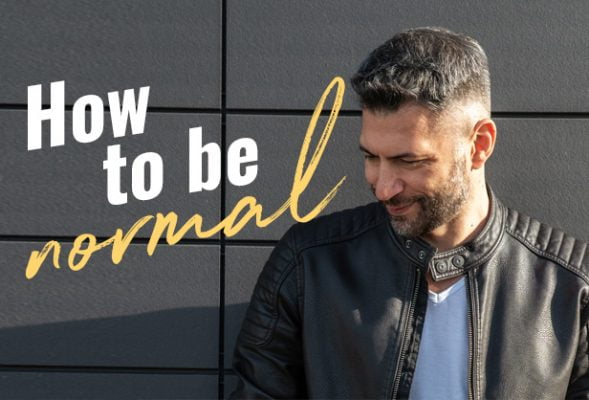 The most delicious apple pie in the world

I have always loved apple pies.

Once, my love for apple pies dominated me so much that I decided to find the tastiest apple pie in the world. A rather naive and childish goal, but I got to work. I started to travel, and looked for it in England, France, Austria, Hungary, the Czech Republic, and Lithuania. Every time I took pictures of the pies.

Once, when a friend found out that I was looking for the tastiest apple pie in the world, he said, “Alex, I know where the best pie in the world is—in Amsterdam. YOU WILL DIEEEEEEE EATING THE APPLE PIE THERE!”

I couldn’t hold back. I bought tickets.

After meeting two Amsterdamers, I asked them for help, “Look, I’m looking for a place that bakes the most delicious apple pie. And I want to ask you to take me there… Can you? I could do it myself but still can’t connect to the internet. (That was a long time ago and the internet was worth its weight in gold.) I only have a map,” I said.

They exchanged glances when they saw my map.

We walked for a long time. Very long. Maybe about 25 minutes. One of the Amsterdamers began to get nervous. And then another one burst with anger, “Are you serious about apple pie? We thought it was a joke! And you turn out to be insane!” he stated.

I know how they felt, but… Something unexpected happened. Amsterdammers have become fans of apple pie. Because the pie in this restaurant tasted divine.

Result: The Amsterdamers not only ate two portions. They asked the waiter to invite the baker so they could take a picture with him.

After this event, we became a tribe looking for the best apple pie in the world.

And although both Amsterdamers initially thought I was insane, my actions got them to join my tribe.

In other words, instead of changing my actions to appear normal in a certain group of people, I invited people into my group.

Do you know what I’m talking about?

If a person answers that he wants to improve the quality of life or second half or happiness, then I give them three options:

1. Become an ordinary person—a robot. (UNDERSTAND THAT THIS IS THE STUPIDEST OPTION.)
2. Find a place where you will feel at home.
3. CREATE a space that others want to fit in to feel normal.

Oh yes, I suggest creating your own tribe. Because only in your tribe can you feel normal with other normal people who are called idiots, freaks, and anti-normals in other tribes.

In other words, I suggest you create your own normality.

Create your own standards!

Create your own world!

Facts about society and being normal

As you have already noticed, society is divided into many different groups of people. Therefore, it’s IMPOSSIBLE to be normal in all groups.

Sure, you can choose a group with more people, but I call this group a grey society.

Therefore, I would suggest being normal in the smallest group possible.

So decide where you want to be.

But if I were you, I would create my own community.

Have you ever been so laid back with a friend that others looked at you as idiots? And it was as if you were normal and the rest of the world wasn’t? And it was enough for you to be together.

Oh yeah, it’s better to feel normal with one person than trying to please everyone who doesn’t know how to relax.