I have never written negative reviews about movies, but this time is special. After the movie “The Minimalists: Less Is Now,” I thought, “I feel sorry for the filmmakers.” 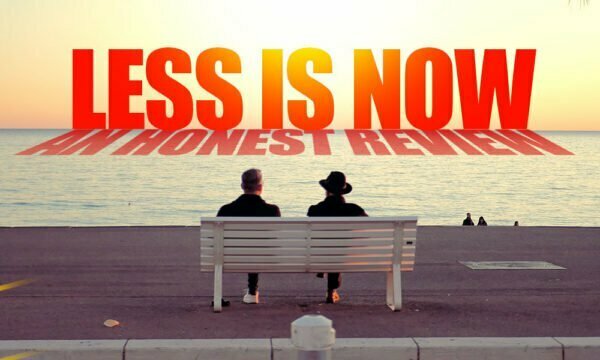 The filmmakers are two guys, Ryan and Joshua.

They entered minimalism for the first time in 2010. So they have been telling the same story for over 12 years. It’s one of the main problems of this movie and it doesn’t satisfy viewers. And there were a lot of them, so the movie received very few flattering comments. 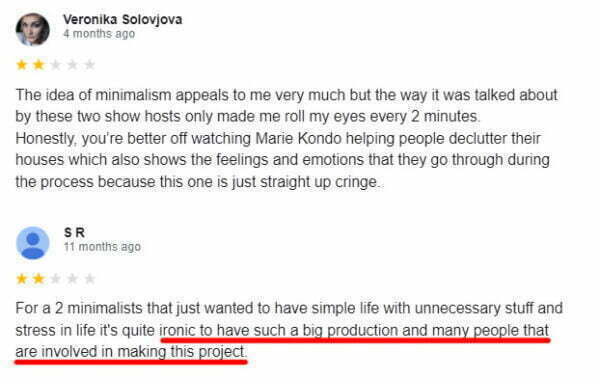 To make it clearer what I want to say, I decided to mention points for which I don’t recommend watching this movie.

1. The movie about minimalism was shot by producers and directors with a maximalist approach.

This movie was made by a huge team, which is silly. Oh yeah, I find it strange that minimalists decided to create a documentary with so many people. (Link to a team that made the movie.)

By the way, there are movies made by only a few people, try to find more information about them! A short example: “Writer’s Block.”

So Joshua and Ryan could check YouTube tips for filming themselves.

I’m sure Joshua and Ryan could earn a lot more if they did the movie together without any cinematographers. It would be sincere. Because it’s difficult to find naturalness and truthfulness in the documentation made in 2021.

2. A movie about minimalism is quite long, not what real minimalists should create.

Answer me, why do minimalists need to create an extremely long documentary? After all, if you are a supporter of minimalism, why do more when the movie itself is called “Less is now?”

3. The filmmakers made a movie to prove something, not just to share ideas. They had expectations of us.

While watching the movie, I saw two immature men trying to prove their truth that their philosophy is the best that could happen in the world. However, their own on-screen behavior shatters their desire to prove that the journey to minimalism is a very simple thing. Given what is happening on the screen, it becomes clear that being a minimalist is much more difficult than being a shopaholic. This fact is not audible, but it’s visible on the screen even without much effort.

But the most unfortunate thing is how desperately Joshua and Ryan try to prove to people that they have that one answer, are already happy and have everything they need. But that doesn’t seem to be true.

I remember the Michael Jackson documentary where Michael said he never had plastic surgery. Looking at his face, it was hard to believe it. A similar thing happened in this documentary.

There are many unnatural scenes in the documentary where Ryan and Joshua try to recreate the pain they experienced in the past. The question is, why was this effort needed? Maybe to increase sales? Surprisingly, minimalists who encourage always to act thoughtfully have put on a jacket to play themselves in the past. Are there no more important things? Was it really necessary to do it?

I understand the producers wanted to show their past and maybe they asked Ryan and Joshua to wear jackets, but they agreed to an offer. This means that they don’t control the situation themselves. But how much is a minimalist’s life worth when run by producers, managers, and the Netflix brand? What is the value of minimalism when you work with Netflix?

The heroes of the documentary are so tense that the question is whether they have really discovered the peace they claim to have discovered.

In the old movie, they look natural, but in this, they look as if their sales have dropped and they are trying to bring themselves back with different solutions.

Therefore, on the screen, you will see their artificial charism. They reminded me of myself when I was making videos to please others. When I waved my hand and spoke louder, not because I was acting the way I am, but because I wanted to show that I’m charismatic. But I realized my mistake, and the Minimalists still hang somewhere among the commercial reflections. They are still wondering how to increase sales, impressions, and so on.

4. The Minimalists are negative people.

Even so, I wonder why The Minimalists only talk about bad things? They seem to be stuck in negativity. After all, they speak only about the dark side of consumerism? Get me right, I don’t support brands that try to push forward unnecessary products. However, the channels created by consumerism helped Joshua and Ryan gain popularity. Everything The Minimalists brand sells is sold in stores that contain other unnecessary products. For example, The Minimalist books can be purchased from a large store that has other unnecessary items. Or you can watch their movie on various sites that spread more than just positive videos…

In other words, these guys are pretending to be little lambs.

5. They say they got rid of the urge to have a lot of money but forgot to mention that they are crazy about attention and trust.

In their bizarre film, they boast that they got rid of the desire to have a lot of money and things, but they don’t say they got addicted to time and attention. And it’s an even bigger disease…

And what can be said about the commercial documentation they created? If you say you don’t care about money, why make money with a movie about consumerism being evil?

“No, we don’t need stuff and a lot of money!” they would say. Okay, the money you don’t need but how much more do you need fans?

You have half a million on Instagram. That’s not enough?

Eh… how I’m looking forward to a movie in which The Minimalists admit that in 2021 they were dependent on the number of views… But looking at them, it’s hard to believe that they dare to convert. And that would be the right marketing move to increase their sales. But the fear of telling the truth is greater than the willingness to help others…

For example, I won’t lie that sometimes circumstances suck me into a vicious circle. So I have to work constantly to rise above the standard mindset and I must admit that it takes time. And here The Minimalists solved all the problems. Ooh, it turns out you’ve solved all your and your loved ones’ psychological problems!

But life is much more complicated than The Minimalists draw, which is truly amazing, with or without all the things around us. And all the things that minimalists fear so much can bring happiness to your kids sometimes because they’re not mature yet, but they need them. And we all have friends who are different and maybe even shopaholics, but we still love them and there are The Minimalists who don’t accept people who think differently, so they deprive themselves of such friends, therefore I don’t respect them.