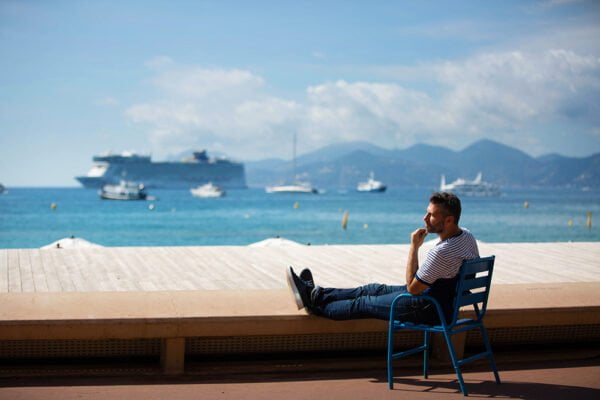 Once upon a time, there was a girl. Her salary was lower than the baseboard, even though she worked seven days a week. Despite this, the boss tried to f*ck her brain as though he were paying millions $ a week. The girl lived far from the city, so it took her a long time to commute by bus to work and back.

Riding the bus, she would lean her head on the cold glass and think about her difficulties/failures. This Monday was no exception. After finishing work, she boarded the bus and pondered about her problems. A tear rolled down her cheek.

The emptiness was inside her.

She was so pressed by life and in such a bad mood that she thought to herself, “To hell with everything! I’ll just be happy; I’ll be happy for no reason!”

Although the girl was fed up with everything, and despite the fact that her whole body was saturated with a huge, HUGE desire to change her life, she failed. She simply failed. She grabbed her cell phone out of habit and sought to drown her troubles by browsing the internet. After all, getting away from reality is seemingly easier than discovering happiness in the real world, right?

Feelings of endless pain multiplied a thousandfold, permeated her body, brain, and even the tips of her ears. However, this time, she did not feel her own pain; instead, she felt the pain of all the women in the world. She mentally placed the pain of all the women in a humongous sphere in her mind and compared it to her own; this gave her an idea of how many problems other women have. Doing this helped her understand how insignificant her pain was compared to the suffering of other people.

The thought of that reassured her. Then something unexpected happened. The girl thought, “Wait a minute… there’s no one who can help those girls who are hurt like me…”

After a few seconds, she continued her thought: “Maybe I’m responsible for all these women. Who will help them if not me? What will inspire them to change? After all, these girls don’t know about me, although I know about them! This means that I am responsible for them… Only me…”

Realizing her importance in society, she smiled. She did it genuinely. She smiled not only with her lips but also with her eyes. Not only did she smile with her eyes, but she also smiled with her body, hair, and even her ears.

This emotion entered her subconscious.

The next morning, she remembered the feeling and smiled again. It was the beginning of something new, unique.

She only smiled for one reason: SHE HAD FOUND HER PURPOSE, as the motivator Alex Monaco found his.

And she started to work.

I could continue talking a lot about this girl, but let’s focus on why she became the main character of this article. After all, at the beginning of the story, she was a simple girl. Seriously, why did she become a hero at the end of the article?

When you care for others, the underlying pain loses its clout.

When you care for others, you begin to feel the value of your life.

When you look after others when you wake up in the morning, you feel needed, and you no longer ask yourself, “Why live, for what reason?”

I’m not saying you just have to take care of others, but those who only care about themselves feel a greater void. Why is that so? Because sooner or later, they will notice that the people around them do not respect them…

That’s why it’s essential to understand that when you think beyond just yourself, you are distracting yourself from the pain. In other words, caring for others is a cure for inner emptiness.

When you help others, you eventually begin to feel fulfillment. This is what the sage in the book “Way of a Peaceful Warrior” was talking about.