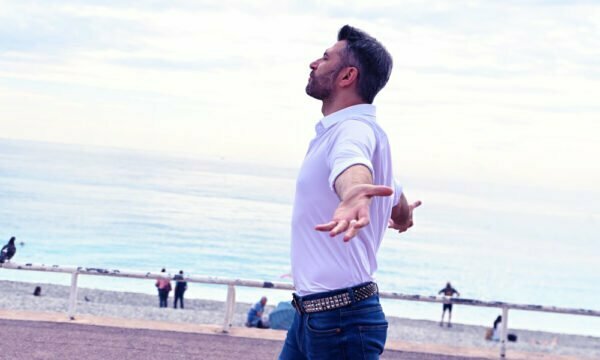 Do you know what the happiness report is? Do you know which countries are the happiest? Below you will find a lot of helpful information on:

a) What exactly is a happiness report,

c) According to what criteria are the happiest countries determined.

What is a happiness report?

The World Happiness Report is a report, a tool that helps rank the happiness of individuals in 158 countries around the globe.

The first World Happiness Report was published in 2012. The second one was produced under the auspices of the SDSN. This article will tell you about the reports from 2019-to 2021. In 2023, we’ll get even more information that will reflect the dark times because you know what’s going on (wars).

Why is a happiness report important?

The report does a regression analysis to look at how happiness scores could be explained by looking at tangible and intangible factors that could factor in:

Some people believe that a happiness report should be a guiding force behind policy design.

Unfortunately, few use this information that can be found in the reports. We can see this from the ongoing wars. However, you can use this report for your own life. For example, you can choose where to live. (After all, living where the happiest people are is quite wise, right?)

However, there are many critics. Some state rankings published by the report’s creators are disconnected from reality. For example, amid unrest, strikes, protests, and starvation, Togo in Africa witnessed the sharpest jump in ranking from 158 in 2015 to 139 in 2018. At times, rankings seem counterintuitive. In WHR 2018, Pakistan is the happiest among SAARC countries and India among the least. People also ask, how do countries with some of the most significant users of antidepressants, like Iceland and Denmark, are also among the happiest? If suicide is the biggest manifestation of unhappiness, then how can Finland, which has one of the highest suicides rates in the developed world, be the happiest? Different happiness surveys have often yielded contradictory and inconsistent results, putting a question mark on the subjectivity of measuring happiness.

Despite the objections, it seems that there were no significant changes in the research carried out by the people representing the happiness report…

What are the 6 variables in the world’s happiness report?

I’ve always wondered how researchers determine which countries are the happiest. After all, everyone understands happiness differently.

That’s why I’m most excited about this part of the article.

According to six variables, the happiness ranking of countries was determined by asking individuals to evaluate their lives as a whole. Respondents scored them on a scale of 0 to 10.

To be fair, these questions raise much thicker questions. Because what if social support, health, freedom are okay, but what if you have a perceptual problem with what is happiness? What if you are alone with no family, and what if…

What do I think about the report, about the six questions?

There are very few years for psychology. For example, the APA organization was established in 1892. And we humans need a long time to understand what happiness is. However, I can already see that the questions about the happiness factor are superficial and childish.

Forgive my opinion; one of the key points should be being able to feel the happiness that is inside. It’s not just my thought. When I was at MIT, I met highly knowledgeable lecturers. In one of the lectures, I heard an excellent thought.

The lecturer said the happiest country would be one where more people learn to feel happy regardless of external factors.

If believe what I heard, it would be great if human happiness researchers asked the respondents, “Do you know how to feel happy regardless of outside influences?” I know this question is debatable. However, the researchers’ issues in their happiness reports are also debatable.

And to those who say I’m a fool, I suggest returning to the happiness report in 2050, and I can guarantee that the methods the researchers will use will be 100% different. I can bet on it!

Anyway, I’m grateful that there are people who do reports. This is the beginning. This is an investment that hopes to turn into something more serious!

What is the happiest country in the world in 2021? 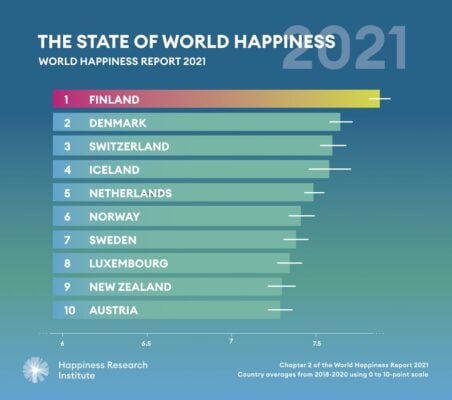 By the way, you can distinguish the level of happiness according to a broader audience: 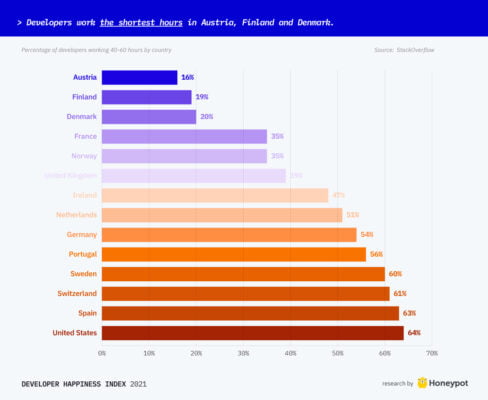 Why is this country happiest, and was it happy last year?
In 2020 Finland was first as well, like in 2021 before.

Which is the saddest/unhappiest country in the world?

Afghanistan is the unhappiest country globally—even before the Taliban swept to power last August. According to a so-called World Happiness report released ahead of the U.N.—designated International Day of Happiness on Sunday, March 19, 2022.

Resources: Our World In Data article Happiness And Life Satisfaction