Once, my friend got into deep sh!t, I mean, quicksand. As he was sinking, he felt like a squeezed tube of toothpaste. He found it harder to breathe. He caused even more panic by screaming: “Heeeelp me, I’m droooowning!” That was only the aperitif. Suddenly he remembered a Hollywood film, where the main character’s body sank into a savage mess, so he jumped into the actor’s role. Heartbeat accelerated. Boom! Boom! Boom!

Survival instincts and stress accompanied increased heartbeat. As you know, a stressed person always creates more difficult situations than a non-stressed one, so he started to sink even faster. Unfortunately, he didn’t know that quicksand is not fatal. Jump into Google and search “How many people have been killed by quicksand?”—you’ll find nil. Why? The density of quicksand or a swamp is higher than your body’s; therefore, it’s not easy to die in the sand. So, nothing happened to my friend!

Although he thought he’d die, right at this moment, he is enjoying a cup of coffee (he told me about this when I called him one minute ago)! So everything is cool, but that situation gave him a load of stress. Interestingly, he felt the same way during his school years, when several classmates SANK him in a sea of humiliation.

He felt similarly talking to the boss who threatened to drown him in debt. Therefore, every damned time he faced common difficulties (which we all have), he felt as though he were caught in a quicksand of problems.

As you understand, this article is about two types of quicksand, physical and emotional, in which people drown ten times a day.

An emotional quicksand or swamp of bad thoughts

I watched a lot of people who get caught up in a massive emotional quicksand.

For example, I once got a call from an old friend via Skype.

“Got myself into sh!t,” he stated.

After receiving my request to continue, he added:

“Alex, I promised to buy my girlfriend a car for her birthday. I betrayed her. I was counting on a big order, but it failed to come through, and now I don’t know what to do.”

He loved that girl so much that he was afraid he’d lose her. He couldn’t take out a loan, as he already had one. Thoughts about separation dragged him into a swamp of bad thoughts. He kept telling himself:

“I won’t survive if she leaves me. What should I do? Why was I so stupid? Why did I promise her a car? Why is it always me that gets SWAMPED into such nonsense?”

“You’re a stupid jerk and a twat! Dumbass! Don’t f*uck my head with your pseudo-problems! You tried to buy your woman with a car; who does that?” I could have said to him had I been a jerk, but I could hear grief from his voice. So, I focused only on helping him. I told him that I had heard much more stupid and weirder stories, adding that he was not dumb, that he just wanted something nice for his girlfriend. I emphasized that he didn’t need to take any serious decisions during these days, as things usually resolve themselves independently. When I asked him if he thought about calling a helpline, he replied that he definitely wouldn’t commit suicide. He admitted that he couldn’t understand why he was so stupid and didn’t know what to do next. He spoke for over 20 minutes. After he had calmed down, he promised to call me back in a few days.

What do you think happened after?

As soon as he told his girlfriend the truth, she said: “Everything’s alright,” and they hugged. So, he got out of the swamp of bad thoughts again, just as he had a thousand times before. It could not be any other way. All those who live in your city have faced it before. Some people drown in problems at work, others on the street or at home. By reacting too sensitively to problems, they give their life more unhappy moments.

People should understand that their happiness level falls not because they’re facing many problems but because they react too sensitively to what is happening with them. Or maybe I’m wrong? Then, why are there clever people in the world who solve hundreds of problems every day (Elon Musk, for example) but stress much less than those who only solve one problem?

“Alex, you are crazy! That’s easy for you to say, as you don’t have problems, and I have loads of them! I must go to school every day; I don’t have money for a new Playstation!” a young boy will state.

I’ll tell him: “Hey, you can’t even imagine how many problems people working in orphanages have! What about a woman who works as a medical doctor in prison; and what about a surgeon who has performed more than 1000 heart operations and rescued so many people, do you think they have fewer problems than you do???”

Therefore, you can choose how to deal with the problem swamps: grieve over them or learn how to build the future from them.

Oh yes, you can do many things from the material that others avoid.

Don’t you believe this is so?

Then answer me: What is quicksand made of; from sand, isn’t it?

You can build a house out of it!

In other words, you can look at the material either as a builder of happiness or a victim would. The builder (creator) of happiness likes to create various objects out of problems; however, the victims don’t create anything.

Victims don’t like to draw a heart from problems / sand… 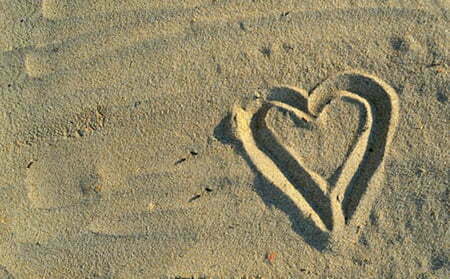 I’m talking metaphorically. After all, as a result of experiencing problems, you can get closer to your other half.

When a person shares their problems with you, you get closer to that person by listening to them, right?

Each time you help a loved person talk about problems, you become even closer. Therefore, sometimes it’s worth jumping into a swamp of problems where a loved one is sinking, given that there is no more straightforward way to get closer.

As you can see, everything depends on the angle from which you look at the material you are sinking into.

After all, some people pay to get bogged down.

Do you see these heads sticking out of the sand? These men pay more than one euro to be buried so they can relax and enjoy this form of therapy. 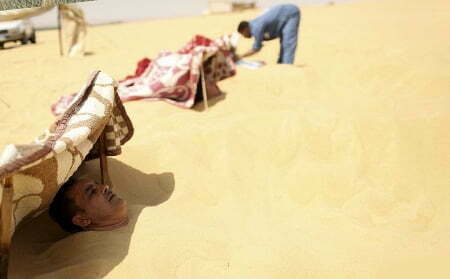 Something is missing in thisp photo…

Maybe a note that reads “Sand baths: Enjoy and have a blast”?

As you can see, people earn money by burying people.

People have a knack for finding a way to make money from just about anything! Have a look at manure prices online (link). I know one guy who fell into the manure business. He says things are going well for him.

“I understood your metaphor, but what do you suggest?” the reader will ask. I suggest writing the following words into your subconscious: Your level of happiness will increase not when you EMERGE from your problems for good but when you learn to reap the maximum benefits from them.

“Are you suggesting I create more problems? But this is hard! How do I get out of trouble if I start drowning in them?”

Yes, sometimes we get stuck in a massive pile of sh!t. It causes a lot of tension and stress, so I will provide you some rules that you should follow.

How to get out of quicksand or an emotional swamp

I worked on a mini-list that shows the similarities between an actual swamp and a psychological one.

The following memo should help you in all life situations. Use it.