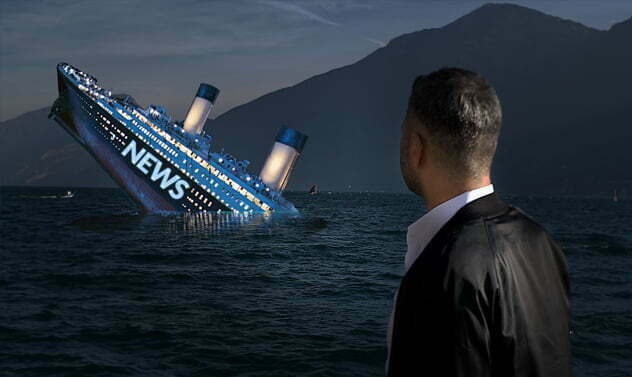 What do you think entrepreneurs who own television, or news sites want?

a) Help you discover happiness; or
b) Make more money.

I think you know the answer. True, everything was different at the beginning. Television stations and the press belonged to the state, but men with large bag$ knocked on the door one day. After purchasing the state’s television stations, they decided to create a vast magnet that would attract viewers to the TV to such a point that viewers wouldn’t even have enough time to go to the bathroom. They called psychologists and asked them to put the audience’s hearts on a tray—to conduct research.

The psychologists rolled up their sleeves. It turned out people wanted good news, but when it came to watching the news, they were more interested in bad news (something that has once again been confirmed by new research). Why is this so?

Viewers believe that knowing the worst news will help them to avoid problems in their lives. This is naïve because those who don’t watch the news don’t die more frequently than those who watch the news, but it is as it is—people want to know what’s going on. Upon learning this truth about news, entrepreneurs demanded as much negative content as possible from their employees (journalists).

As a result, over 90 percent of multimedia content is negative; therefore, anyone who turns on the news today is guaranteed to get a HUGE dose of anxiety.

1. Your loved ones are still dependent on media that harm their health.

Yes, your friends are ruining their lives because of negative information. On the other hand, why am I worried about your loved ones if you are not even interested in their well-being? I’m kidding! I care about your loved ones’ well-being, so I took the time to answer this question. I read a massive amount of research that overflowed with data about the harmfulness of news.

For example, this study conducted in 1997 involved two groups of people. The first group received negative news, while the second received either positive or neutral information. What do you think the results of this study were? You’ll be surprised by the outcome that I’m about to share with you! Here it comes: those who watched the negative news made millions and built great relationships! Again, I’m kidding! Indeed, the research demonstrated that those who viewed the negative news were more nervous, prone to worry, dramatization, and imagined how things would be bad for them in the future.

2. The news is watched by everyone, including all of your friends, pals, and even that cool guy trying to prove to you that he really doesn’t watch the news.

As you know, he hangs pasta on himself without realizing it. He just doesn’t think he’s watching the news. But more than 15% of the time (every single day), this guy spends searching for news online. This news is not necessarily negative, but it has to do with entertainment or relaxation. It consumes sooooooooooo much time! Oh yeah, let’s talk about time!!!

People spend an average of 30-57 minutes a day trying to know the latest breaking news. Clinical psychologist Nick Wignall works with clients who depend on news as though it were a drug. In an excellent article, he presented an audit of one client who spent more than 3 hours a day following the news! Can you imagine, 3 hours every single day! That’s over 1000 hours a year!!!

Where else can you spend so much time? In the bathroom. I’m not kidding! Do you know how many people like to “scroll” while sitting on the toilet? What’s more, time is also spent following the news:

How much time do you spend on the news?

“I know all this! And I spent a lot of time on the news in the past,” a reader will say. I will shake his hand and add: “it’s great that you’ve solved this problem, but what about your loved ones who still depend on a constantly updated feed? And what if they are addicted to the news on Facebook, Instagram, and TikTok villages?”

Give them this article and ask them to ask themselves the following five questions:

Question no. 1. Does watching the news add value to my life?

Question no. 2. Does the news really change my life?

Question no. 3. Can the news guarantee that my family will be happy?

Question no. 4. What if I take the time to do meaningful work that makes my life more meaningful?

(By the way, I wrote my first book when I shut down the internet and abstained from watching the news. My goal was to write what I already knew and experienced. To be successful, I had to get rid of time leeches: headlines, news, scandals. I really didn’t miss any useful information while writing the book. As you can see, I survived without a TV!)

Question no. 5. Maybe there are faster ways to find out what’s going on?

After all, it doesn’t take long to peruse the headlines, skim through the news teasers. The prevalence of COVID-19 can be found on statistical websites. This is enough for people to know what’s going on and use the rest of the time for more important things.

My opinion: News is only useful if it contains straightforward ways that can change the world for the better.

Or maybe I’m wrong? Perhaps the media is not so empty, pointless, tasteless? We’ll be diving deeper into this question soon! Take a deep breath!

Well, yes, one can find good sources of information on the internet. I’m talking about the independent media. However, there are only a few such channels nowadays, while mass media is much more common. It is an undeniable fact that commercial media only cares about money and filling their wallets. The formulated situation generated the following quote:

The goal of independent media is to solve problems, and the goal of pop media is to give people as much entertainment as possible.

By the way, I applaud the rural media that do not escalate scandals. Oh yes, rural media is much more serious than commercial media (pop media), but it has lost its relevance because the internet took over this niche. Now the news is everywhere, on Facebook, TikTok, and even Instagram. After all, the posts you see on your wall are nothing but news. Sure, there’s little politics here, but a lot of trinkets, pop stars. When you see a new photo, you understand what an “influencer” meant: Look at me; I’m cool! I just bought a new pair of cool shoes!

So, the question is: does the news shared by pop stars truly give us value?

Yes, sometimes news posts can be fun, so we like to scroll, but what real benefit do we obtain? Does knowing the news increase our value? Does news help change the world for the better? After all, if there’s a discussion about killings, explosions, it should affect society. But why don’t the problems diminish?

Why are conflicts between politicians more frequent?

Why doesn’t the news raise the question of whether it’s purposeful for POLITICIANS to come into conflict with each other? Oh, yes, if the news worked, the pandemic would have been resolved by now! What if the purpose of the news is not to solve problems, but only tell about them?

Do some research and open the news portal. You will see news created according to the following template. It consists of three circumstances: 1) what happened, 2) where it happened, and 3) to whom it happened. For example, suppose there is a car accident. If an unknown person is involved in the accident, their name does not matter.

After all, you know, the media spits upon mortals, so in the event of a disaster, it’s never said how the victim or their loved ones

may be helped. There is no hint of what will be done to keep others from falling into a similar situation on that particular stretch of road. Only what is interesting is discussed, not what is IMPORTANT. Therefore, the entrepreneurs who own media portals rarely cared for society. Their goal was to satisfy the entertainment-hungry segment (because it is the majority). And here we come upon a most fascinating fact about the counteraction.

As you know, every action produces a counteraction, so the media being sold to entertainment enthusiasts surround themselves with readers who do not intend to take any action. When you have such an audience, you lose your influence on society.

You see, news writers spend all their time making money, so they don’t have time to create levers that could improve people’s lives. For these reasons, news creators have lost influence.

And yes, let us applaud the intellectuals (who knows true about news) of whom, unfortunately, there only remains a handful in the world. It is intellectuals who change society. Intellectuals are not elites, so the elite dance to the trumpet of intellectuals, not the other way around, which fascinates and inspires. Oh yes, it’s good to see how intellectuals with smaller audiences are capable of steering society in the right direction, which is not the case with news portals, and others.

Whoever reads Mark Menson will understand my thoughts. Mark wrote a detailed article why you should quit the news in which he presents research proving that news does not form opinions + does not in any way affect the elections. I didn’t say it; Mark did, who, by the way, is an intellectual with a huge impact on the world, although he has less money than the owners of television, and news portals.

SOME ARE WORKING; OTHERS ARE TALKING.

P.S. At this moment, hundreds of doctors are saving lives. Doctors do it without watching the news. They are busy with more important matters, so they don’t have time. But news creators have time. They’re currently making another sensational headline.

A few facts:
1. It’s been proven that news has a negative impact. It causes stress, anxiety: why is all the news bad
2. Research demonstrates that 90 percent of the news consists of negative information: veteran handouts.pdf
3. On average, people spend around 1 hour a day following the news, and some spend over 3 hours every day: the news audit. A simple way to find time for what matters most

More links:
Is reading news bad for you
Why you should quit the news
Five reasons why consuming news excessively bad for your health
News is bad
We all addicted to bad news. Here s how to stop