One time, my mother bought cotton candy for my brother and me. Brother ate, and I didn’t. After showing him my portion, I happily told my brother, “Look, I have cotton candy, and I will not eat it, and later you will envy me!”

(Such a little loudmouth I was.)

I put my cotton candy in a drawer.

And… I forgot about it… The following day I remembered my cotton candy, but when I opened the drawer, all I found was a stick…

I have done this many times in the future. I tried to save my happiness by hiding it from people’s eyes and then enjoying it later, but after a while, I realized that happiness had evaporated like cotton candy. Because happiness can’t be put aside, it can’t be saved. You can only use it. And if you don’t, it will evaporate.

I propose to look at happiness in 3D format. I’m going to throw on the table 5 reasons why is it hard to feel happiness in the here and now.

1. We have a habit of constantly pressing the “next” button

Remember when you took delicious ice cream from the fridge and wanted something more—coffee or tea? It’s the same with other desires of our life. When we achieve the desired goal, we want something more. Everything would be okay, but in the pursuit of an extra, we forget about the importance of enjoying what we already have in our hands. For example, I once wanted to find a girlfriend. When I found her, I wanted not only meetings but also kisses. But at the beginning of the relationship, I thought I would be happy if I only had the chance to go on a date? I was wrong! Because after my date, I hit “next” again. It causes complications. Because if you don’t enjoy a relationship, you don’t live it, and you are in too much of a hurry, it can break down. This is always the case if you press the “next” button too often, like some monkey “Akaaaa akkaa kaaa.”

Let’s try at least one hour a day not to use the “next” button. Take a cup of tea—just it. You do not need sugar or candies—tea is enough. For example, recently, I have been drinking coffee without sugar. Strange, but I like it (it depends on coffee).

What if you admire the sunset in the evening without friends, other company, or coffee?

I understand you want to watch the sunset leaning against the car you like and holding the cup in your hand, right? Somehow people feel better… When things surround them. 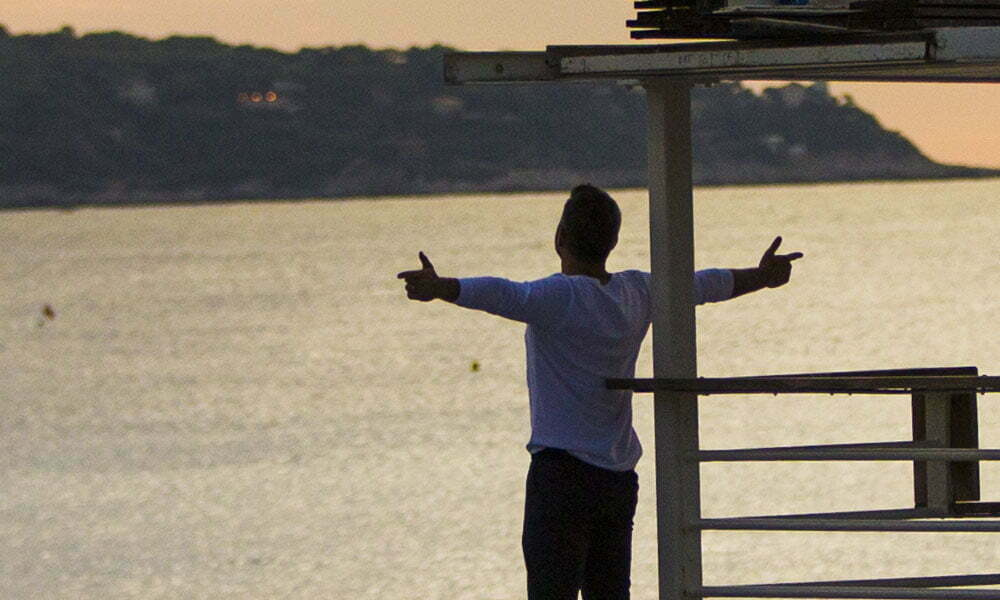 (Do you see a car in this photo? But I was feeling great without it: Mmmmmm.)

On the other hand, if you want to keep pressing the “next” button, keep doing it! GO AHEAD! I’ve seen people who press three buttons at once. These people have money but little knowledge of happiness. They hope to experience as many emotions as possible, but they fail.

2. When we achieve a goal, we receive a “bonus” with it

There is one principle that works well in relationships, business, and personal life. This is manifested in the fact that no matter what pleasure you experience, you will receive pleasant and bad emotions with it. For example, remember your first relationship. With it, you received not only romantic kisses but also a sea of disputes. You had to listen to your other half (which only a few people can do), and when you didn’t, your life turned to hell. Maybe it didn’t happen to you, but I experienced it with my own skin.

Or imagine that you are getting the job of your dreams. Everything seems excellent; after all, the job is outstanding, but you receive a list of duties you will have to complete along with the work. That means you’ll have to swallow your boss’s accusations or your coworkers’ jokes.

Not to mention the POP stars who seem to have no problems. They wanted to be happy, so they looked for popularity, but they didn’t have time to be satisfied as they struggled with criticism, scandals, journalists, and maybe even Larry King. So it’s harder for POP stars to be happy than for children for whom a portion of ice cream is enough to fly to the land of bliss. Yum-yum.

So when we achieve a goal, we receive happiness, but there are far fewer of it than problems.

How to deal with this problem? There is only one way—admit that each goal you reach will always create more problems and responsibilities than you had before. When you realize it, you willingly accept new challenges and difficulties. You start to deal with them in a civilized and intelligent way, so you experience more happiness than frustration when you achieve your goals.

3. If you are working towards your goal with different tools, chances are good that you will forget to dedicate time to happiness

Do you know a person who dreams of earning a round sum? They imagine how good it will be when they achieve their goal, so they work, work… Money has become their tool of happiness, so they have no time to stand in front of the mirror and tell themselves, “You are already a happy person!”

After all, when you think about buying a better house, your thoughts focus only on the house, not on how to experience happiness without it?

It’s a pity, but you behave similarly sometimes, reader. I hope I’m wrong, so answer for what you spend the most time on and why? For instruments of aspiration or the immediate emotions of happiness? What if you found a balance between emotions and goals? These are two different things. Besides, emotions can be aroused by making the pose of Alex Monaco, which is presented on the cover of the book “Happy Bastards,” and shouting, “Yeee!!! I have time for happiness!”

4. We invest too much time to keep what we have, which creates a lot of stress and tension

In the past, when I achieved a goal, I tried to catch it and focus on storage. I stood like a policeman beside it, afraid that someone would steal. The same thing happened with a woman I was scared to lose. Apparently, that was a long time ago when I was stupid… Back then, I was asking my ex, is she really not cheating on me? As f*cking jealous person, I questioned her if she really loved me. It was stressful for both of us, so we broke up. And then I decided to burn my jealousy. It took a while, but I did it. It changed my behavior, my mood and helped me discover the source of happiness. Therefore, to those who are jealous, I will tell the eternal truth, “A person who stops stressing about betrayal will find a lot of free time to spend with a loved one, more moments of happiness.” In other words, when you stop showing jealousy scenes, the person with you feels much better, and the relationship is much better, stronger, and lasts longer. After all, there is no desire to betray a person who doesn’t f*ck your mind!

But enough about relationships… Okay, it’s not enough. Do you remember the “Cable Guy” movie, where Jim Carrey found a friend and refused to let him go? The new friend became everything for him—a tool of happiness and free time. When he tried to tie his new friend to him, he got angry because he felt so much tension. When you are so tense, the goals you achieve literally run away from you. And when you learn to enjoy what you have, happiness, including new friends, they knock on your door. Knock knock!

5. We have a hard time distinguishing between synthetic and natural happiness. Purchased stuff and entertainment don’t bring you long-term happiness

You’ve seen people trying to buy happiness many times, even though it’s impossible to do. Nevertheless, people go to the store and try to buy happiness in liquid form (in small bottles). Though they feel well after drinking alcohol for a short time, later they feel depressed because they fill their stomachs with a substitute for happiness. Even so, they still try to trick it. There are those who buy travel tickets. They hope to find happiness abroad, but they experience far less excitement than children who splash in a marsh near their home when they arrive on a remote island.

Why don’t children need palm trees, long journeys to drown in happiness? Kids aren’t snooty—plus, kids have lower expectations than adults. It was easy for you too, but as you grew up, you received a bad formula for happiness from adults with a coded message that says happiness will come if you work harder, but that’s not true…

“Where is the truth?” you will ask. The truth is waiting for you here: Happiness depends on allowing yourself to feel good.

I know it’s not easy to achieve happiness/fulfillment. However, I do know adults who have made it without paying a penny for it. They just put in more effort than those who climbed Everest… (I’m talking about work with my personality and emotional intelligence, which is bloody hard, but possible.)